"Stick your passport in your pocket and get the Blue Boys in the van, coz we're all going mental on the continent..."

Oh brother, that's the plan anyway. But it ain't as simple as all that, is it Rodders? As getting the fools and horses to work? In this day and age, you also need spreadsheets, Skyscanner and a bit of savvy as well.

And so it's not the 'He Who Dares' mantra favoured by Del Boy and the Special Air Service that comes to mind when looking ahead to Leicester's first ever European Cup adventure, but rather the 'Be Prepared' motto of the equally fearsome Scouting movement.

Looking up and down the draw, there are no fewer than 12 possible group stage opponents for which a coach and ferry journey is feasible. The rest? Well, we'll see you all for some horrible 5am swigs at Stansted Spoons.

There's enough buy-in for a coach if the opportunity presents itself. Fifty-odd lads all willing to risk missing out on cheap transport by other means in exchange for the chance of a trip of a lifetime.

And then the draw happens. Club Brugge. The first fixture. Things just got very real.

Luckily, JC is on the case. The mastermind behind the Bond villain-esque Excel spreadsheet documenting all the possible routes for a European invasion. And he's found a coach company. And he's wangled getting booze on board. And, fuck me, that's not a bad price at all, is it?

And so, in the early hours of 14th September 2016, the UFS bus sets off for Leicester. There's quick pit stop at Harborough to pick up a few passengers and, more importantly, load the booze aboard, before hot-footing it down to Dover. The beer's flowing and no-one's sleeping as the A14, M11 and M25 flash by accompanied by a soundtrack of classic Indie and the odd Eurotrance anthem - "Well, we're playing in Europe ent weh?"

Sunrise on the Kent coast and it's time to embark. The ferry bar's open and populated by a group of narked Borussia Mönchengladbach fans returning from their match against Manchester City, abandoned due to a bit of "Donner und Blitzen" around Moss Side. Luckily, a quick blast of Gladbach's goal music - Scooter classic 'Maria (I Like It Loud)' - from one of our party who visited their ground breaks the ice. Like I say - "In Europe ent weh?"

On the other side of the Channel, the 3am tins of Boddingtons are starting to kick in and so the coach goes quiet as we head for the Belgian border. After most catch a quick kip, a blast of the Utah Saints gets everyone back alert. "Oh, I just know that something good is gonna happen..." Indeed it is.

We disembark in Bruges, still not quite believing that this is where we get to watch our football club today, and head straight for the main square. It's instantly recognisable for anyone who's seen the film 'In Bruges' and, to be fair, it does look like "a fucking fairytale or something".

But it's the hinterland of this picturesque space we're aiming for, the Eiermarkt behind - a little plaza filled with bars ready to welcome the invading Blue Army. Banners are hung and it's soon christened 'Leicester Square' as it fills with supporters.

Belgium's well known for its daft range of beers, but a standard Jupiler is deemed the sensible session option on a baking hot day. It's Five Euro a pint on tap, but for those of us with a bit more savvy, tins from the supermarket round the corner sort us out.

The songs crack off and a group of lads from Bochum join us. There's no chance of them getting match tickets, like half of the Foxes faithful stood among us, but they wanted to be here anyway - to share this moment with us.

Several hours later and those of us lucky to have tickets make our way to the ground. We try to slyly cab it, but the Belgian police, still reeling from a recent terror attack, are having none of it. It's out of the taxi and a long trek via several security checkpoints for us. It's certainly a decent way of working the Jupiler out of your system anyway.

The buzz is on now, like no other, Leicester mixing it with Europe's finest! We lay out flags across the away end as it slowly fills and the songs get going. "Oh I've got a feeling and it's so sweet..." Damn right. We all have.

The next couple of hours pass like a dream. The end goes ballistic as Albrighton bags less than five minutes in, then Mahrez does Mahrez things to secure a 3-0 win.

Back to the coach and the buzz is still on. We hear tales from ticketless lads who ended up watching the game in a bar that they think was actually just someone's house, and another who failed - complete with half-half scarf - to grift is way into the home end on the pretence of being a groundhopper from Kettering. Another's passport is aboard, but he's not. Luckily we find him again in Calais - but that's another story for another time. I'm too tired to tell it now, we all are, and so it's a dozy journey back home.

Dawn breaks over Leicestershire as we all hop off. I don't think I've ever had a better 24 hours, and I'm not convinced I ever will - unless the chance to follow City by coach and ferry presents itself again. In the words of Derek Trotter... "Bonjour!" 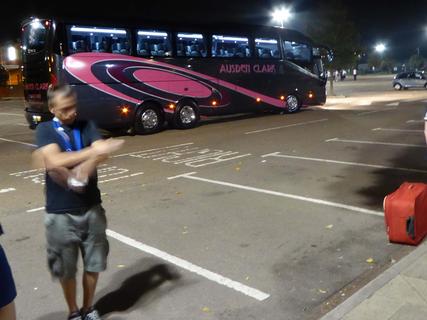 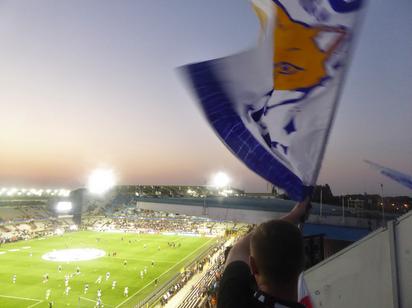 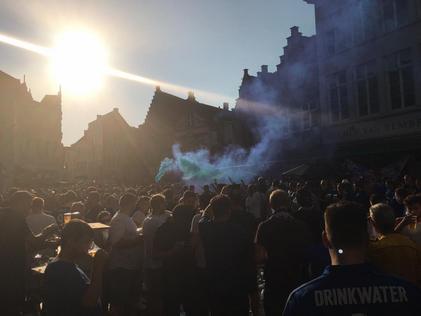 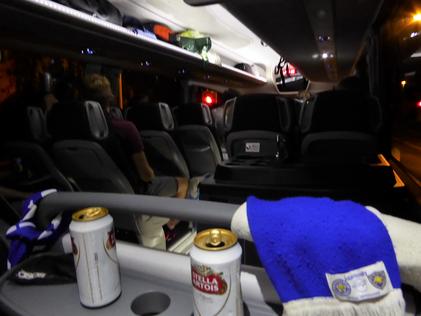